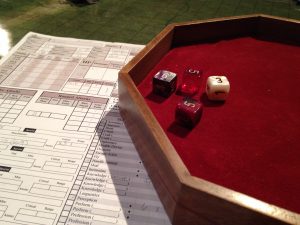 Rolling up a new character!

I’d always had a hard time getting into the fantasy genre. I’d read the odd novel or two, seen the Lord of the Rings trilogy in theatres, but I just couldn’t get into it. Science fiction was the side of the fence I lived on.

When I took up learning Pathfinder RPG, a game set in a fantasy world, I had absolutely no basis for what sort of character would work in this world or what the ultimate goal was in playing said character. I didn’t know where to start, what was a traditional class and their typical influences might be, how they would think, or act.

I was lost. Really lost.

Like a goof, I struggled through at first. I did my best with the very limited knowledge I had, and hoped that while I learned the game I would also learn the world.

I was wrong. It only made it worse for me.

When I finally admitted this lack of knowledge to my gaming group, a light bulb went off for them. They knew I’d been struggling, but until then had thought it was just the game system. They really stepped up to help me: Blair took extra time to explain the backstory of his world for me, while Dee sent me home with a stack of entry-level fantasy books, and Ethan gave me ideas of what sort of actions a character of my class might do. They made it okay for me to ask questions when I before I’d been afraid to ask.

Once I had a better foothold in the fantasy world, creating other characters became much, much easier, and I found I didn’t stress about the game mechanics.

So, how can my bumbling through the fantasy world help you? Here are some tips I’ve picked up along the way.

1- What interests you? You don’t need to have any sort of knowledge of a certain world to know what kind of characters appeal to you. Think about the books and movies you’ve read: did the sauve, debonair James Bond spy appeal to you? How about shape-shifting, ass-kicking Mercedes Thompson? What about the bow-wielding Katniss Everdeen? Tall, large, and fierce Lieutenant Commander Worf? Find one that appeals you, and don’t be afraid to borrow elements from that character.

2- Talk to the GM. They are more than happy to tell you about the world you’re about to play in. If you have an idea (see #1), ask them if that idea will work in their world. A good DM will help you weave the kind of character you want to play in to the world they set up.

3- Listen in. If you’re joining a game already in progress, ask if you can listen to game play for a bit to get a feel for the world and what’s going on. You might find a need for someone that’s missing in the group (a magic user!) or you might get inspired by current events (the trolls ate my parents!).

4- Look at the book. Head to the classes section and find one that might appeal to you. It might be the class description that inspires you, or the character illustration that accompanies it.

5- Man, woman, other? It might seem like a small detail at first, but depending on the world you’re in can change how you play. I once created a female engineer in game set in the 1970s. Though women in sciences wasn’t unheard of, it was still pretty rare, so other characters and NPCs often associated a lot of old-fashioned stereotypes to her. She had to work to overcome those–and the accompanying chip on her shoulder. It made for a more interesting character than just a cookie cutter character that should fit into this world.

I also know some players who will only play one gender — either the same as their own, or not. Start playing whatever you’re comfortable with, but don’t be afraid to try something different.

Hopefully by now you have a good idea of what sort of character you’d like to play. My first long-term character was a druid, sparked by the idea of the Mercedes Thompson from the book series of the same name by Patricia Briggs.