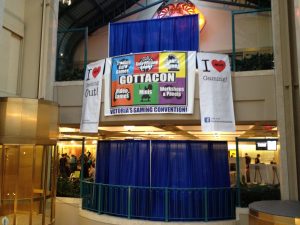 This past weekend we headed to Victoria to attend Gottacon, a yearly convention dedicated to bringing together gaming geeks of all sorts. First held in 2009, Gottacon focuses on being an inclusive gaming experience with a broad spectrum of games: from RPG and table, to miniatures, trading card games, LAN games, and more. Gottacon also offers a variety of panels, workshops, and special events.

This was our first year attending Gottacon, and our experience was definitely great!

With over 350 events scheduled, you can imagine that this convention was jam packed. We’ll be reviewing all the games we played over the coming weeks, but here’s a brief recap of the weekend.

Playing Space Fluxx on the ferry to Gottacon.

Attendees had the option to pre-register for games before the convention using a site called Warhorn, though it wasn’t required. I tried to signup following their instructions, but I never received an all-clear email from the con staff. That wasn’t a big deal though, because most of the board game events we were able to join in without pre-registering.

We went right to the board gaming once the doors opened at 5pm. Blair was very eager to play Kingdom Builder because of the Kickstarter project that he’s currently been eying up. In Kingdom Builder, players create their own kingdoms by building settlements, aiming to earn the most gold by the end of the game. Overall we both enjoyed the game, so much so that Blair backed the big box Kickstarter. 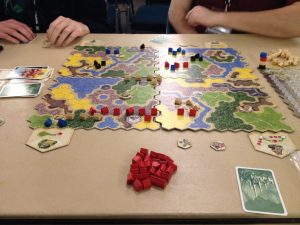 I really wanted to see the Standard Action Live Action D&D, since it sounded so hilarious. A group of five RPGers played the Pathfinder module We Be Goblins 2. As someone still learning how to play table top RPGs, the tips they offered to new players were really reassuring: 1- Roll first, the group will help you with the numbers; 2- Don’t split the group. The game was lighthearted and the players had the audience splitting a gut with laughter. Watching a table top RPG play out was definitely interesting and showed me a different dynamic than what I’m used to in our groups.

Our Saturday start was a bit late because we were both tired. As we waited for the next round of games to start, we borrowed Chez Geek from the board game library and played with B’s cousin and her significant other.

Blair has been really wanting to play Dominion, so the four of us went to learn. There were so many others wanting to learn that this game, that two games had to start. Dominion is a deck-building game where players buy more cards to build their way to the most victory points. This game was a bit of a slow start for us, and I left feeling so-so towards it. I think another round of this game is in order before I make a final decision.

We checked out the silent auction, which included a lot of great deals for a variety of gaming products. I was hoping to snag a like-new copy of the Pathfinder Core Rule book, while B was hoping for like-new copies of Avalon and Coup. Unfortunately neither of us won! 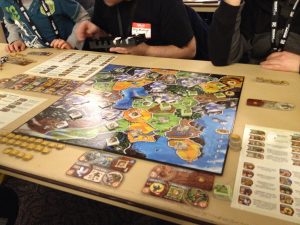 Next we joined a round of Small World. Blair had played this before, but I hadn’t. I’d seen it played on Table Top, so was definitely wanting to play this (plus being a Disney theme parks fan, how could I not want to play?! Commence singing of “it’s a small world after all” in my head.). In Small World, your goal is to rule the world. You choose fantasy races that take over plots of land. This game runs really quickly, and it’s a lot of fun! Each race is matched with a random special bonus quality, which means each time you play the game will be different.

We’d met Adrian Walker, game designer from Giant Monster Games, earlier in the convention. He’d described their new game, Kingdom Bots, and the strategy player in Blair was intrigued. We made sure to catch this demo of the game, 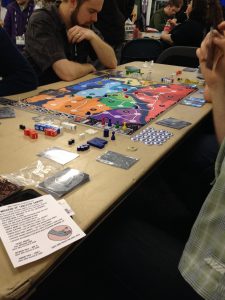 where players play robot factions who try to build new civilizations while obliterating their enemy. All in all this game was great fun with some exciting new ideas alongside a well balanced implementation of old! Make sure you check out their Kickstarter and support this great game.

Next up was a game called Goblins. Admittedly, we were expecting a different game of Goblins; apparently Goblins is a popular name for a board game. This version is a dungeon crawler card game, still in the beta phase. (Unfortunately I can’t seem to find any information about this game on the web).

Since a copy of Amerigo is included in one of the pledge levels for the Kingdom Builder Kickstarter that Blair is eyeing up, he was keen to play this. In Amerigo, players explore “South America”, creating trade routes and building settlements. The neat thing about this game was the cube tower it came with.

Sunday morning we caught the Making Kickass RPG Adventures panel, comprised of veteran GMs Steve Saunders, Douglas Lloyd, Alex Flagg, Chris Tulach, and Jonathan Tweet. These guys offered great tips not only on creating great worlds for players, but also advice on running games and keeping players interested. I think one of the biggest take away for me is that as a GM, you’re a player too and need to have fun as well!

Unfortunately because we had the catch the ferry home, we weren’t able to sit in on anymore scheduled games. We did play a round of Revolution! with B’s cousin. In this game you’re trying to have the most influence in a town facing revolution. Using blackmail, force, or money, you try to spread your influence to earn victory points.

Of all the games we played this weekend, I would say that Small World and Revolution! were my favourites. Blair’s favourite new experiences were Kingdom Bots and Amerigo. Revolution! and Small World were two of his favourites for replayed games.

We both had a blast at the convention. I was definitely impressed by the coordination of everything and the fact that there were no lulls in programming. The attendees at the con were really friendly and welcoming, as we made some great connections with other gamers. Ticket costs were affordable compared to other cons I’ve been to. The Empress Hotel even provided a great food court (though I’m bummed I didn’t get to try the butter chicken poutine!) which was a nice added bonus, since often con food can be pretty awful.

This con is not to be missed, particularly if you’re a gamer of any kind. I would also recommend this con for convention first-timers.